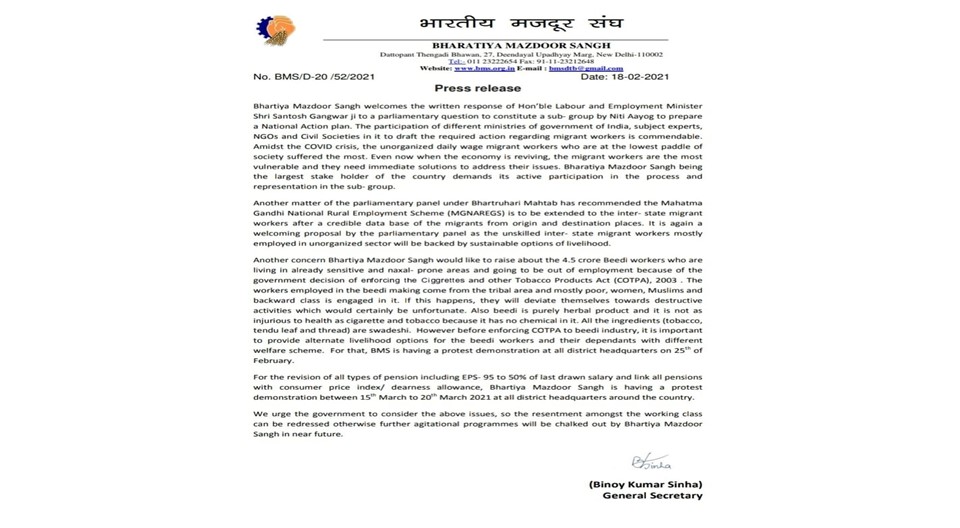 Bhartiya Mazdoor Sangh welcomes the written response of Hon’ble Labour and Employment Minister Shri Santosh Gangwar ji to a parliamentary question to constitute a sub- group by Niti Aayog to prepare a National Action plan. The participation of different ministries of government of India, subject experts, NGOs and Civil Societies in it to draft the required action regarding migrant workers is commendable. Amidst the COVID crisis, the unorganized daily wage rnigrant workers who are at the lowest paddle of society suffered the most. Even now when the economy is reviving, the migrant workers are the most vulnerable and they need immediate solutions to address their issues. Bharatiya Mazdoor Sangh being the largest stake holder of the country demands its active participation in the process and representation in the sub- group.
Another matter of the parliamentary panel under Bhartruhari Mahtab has recommended the Mahatma Gandhi National Rural Employment Scheme (MGNAREGS) is to be extended to the inter- state migrant workers after a credible data base of the migrants from origin and destination places. It is again a welcoming proposal by the parliamentary panel as the unskilled inter- state migrant workers mostly employed in unorganized sector will be backed by sustainable options of livelihood.
Another concern Bhartiya Mazdoor Sangh would like to raise about the 4.5 crore Beech workers who are living in already sensitive and naxal- prone areas and going to be out of employment because of the government decision of enforcing the Ciggrettes and other Tobacco Products Act (COTPA), 2003. The workers employed in the beedi making come from the tribal area and mostly poor, women, Muslims and backward class is engaged in it. If this happens, they will deviate themselves towards destructive activities which would certainly be unfortunate. A. beedi is purely herbal product and it is not as injurious to health as cigarette and tobacco because it has no chemical in it. All the ingredients (tobacco, tendu leaf and thread) are swadeshi. However before enforcing COTPA to beedi industry, it is important to provide alternate livelihood options for the beedi workers and their dependants with different welfare scheme. For that, BMS is having a protest demonstration at all district headquarters on 25. of February.
For the revision of all types of pension including EPS- 95 to 5096 of last drawn salary and link all pensions with consumer price index/ dearness allowance, Bhartiya Mazdoor Sangh is having a protest demonstration between 15th March to 20th March 2021 at all district headquarters around the country.
We urge the government to consider the above issues, so the resentment amongst the working class can be redressed otherwise further agitational programmes will be chalked out by Bhartiya Mazdoor Sangh in near future.